Just save the cake top! 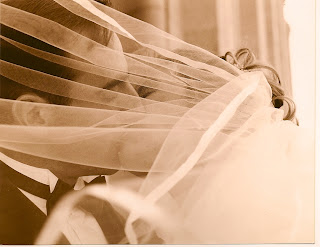 And as we mark the 13th year of our together forever, I can honestly say that my sweet husband is truly one of my favorite human beings. really.

Sometimes I see him doing something with the kids, or fixing something around the house, or diagnosing some funky skin issue by looking at a picture that a friend has texted over (which he usually can do within about .5 seconds in looking at the picture... amazing on a whole new level, as they all just look red and rashy to me!), and I take a step back and think, "wow!"  as in, "wow - he really is one of the most amazing people I have ever met, he is so cool on so many levels, and I get to be lucky enough to grab onto him and enjoy the ride!"

He really is my everything. 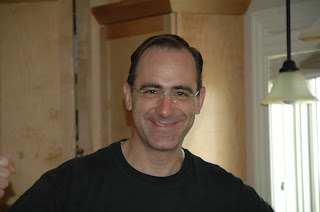 I mean, really, how can you not love a man who can make a rain-drop sound with his mouth?? 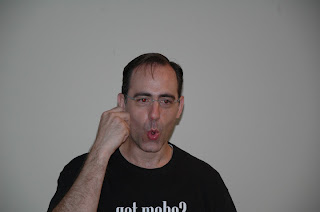 An not only wear a baby wrap, 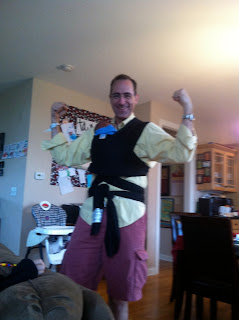 but truly EMBRACE the baby wrap 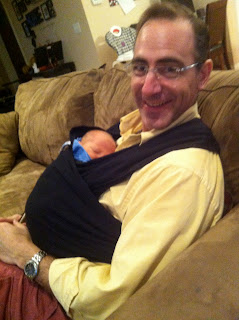 no, I mean REALLY embrace the wrap 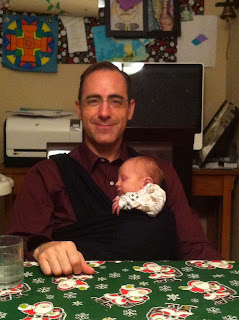 and love the baby inside! 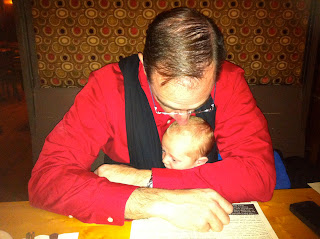 Which is why, every year on our anniversary,
I pay homage to the one wish that he had at our wedding reception.
Really, he was so wonderful in the 'go with the flow' attitude of agreeing to what I would like to have at the wedding.
The whole time, his one and only wish was to make SURE that we saved the top of the wedding cake.
He has visions of snuggling up together on our first anniversary, with the traditional eating of the wedding cake top.
I have no doubt that he had the whole evening already planned out for us even before our reception was finished!
So we left the cake in my parents freezer, and moved across the country.

And truth be told, I completely forgot about said wish
Until the time drew close for our first anniversary
and he sweetly reminded me about his one wish, to eat our wedding cake on our anniversary.
So I decided on our meager budget that it would be worth having it cold shipped from our parents house to us.
And I called my mom to make the arrangements,
only to be told that many months prior the freezer has broken
and everything in said freezer had perished.
EVERYTHING
yep - the ever-wished for cake top
gone.
GONE.

You may as well have told me I had just lost a limb.
How would I break it to my dear, sweet, ever so tender, yet, ever-expectant of his one wedding wish hubby??!
Would we even make it to a second anniversary when the news was shared??!

It was with much trepidation that I slaved over dumped out a cake mix and made a new cake,
Which was presented to him on our first anniversary with the words,
"A New Cake for a New Year"

And much to my amazement,
but not really surprise,
we ended up having a good laugh over it.
And ate the new (read: fresh/non-freezer-burned!) cake,
a new tradition was born.
And had been followed each year with a new rendition of "the cake top" cake.
Some years, fast and furious.
Other years, decadent and decorated.
But every year we mark the completion of yet another year of marriage
and the beginning of another adventure together
With the eating of the cake top.
New
Fresh,
and full of fun possibilities of great, adventurous flavors.

Which, after all, is the mark of each anniversary, right?!

Here's to another new cake, 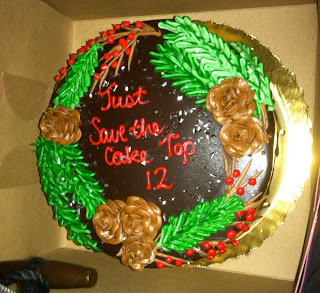 and another new year full of fun and adventure! 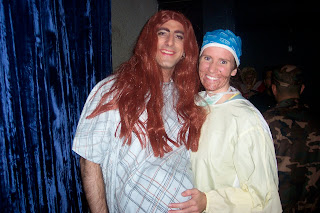 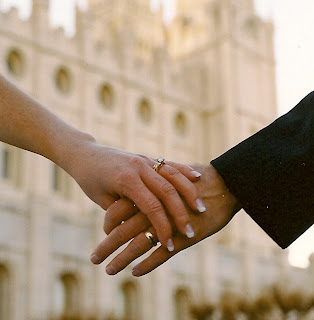 Brewer Bunch
So here is our brave launch into the blogging world. Fun, fun, fun!

Here is the main man of the bunch :)

Our firstborn (by a whopping 3 minutes)

She is definitely the 2nd mom of the family :)

Benjamin is growing entirely too fast for my liking!

Joshua has perfected his "get out of trouble" smile...

the latest addition to our crazy crew!

The Kids Cheesing it up at Christmas